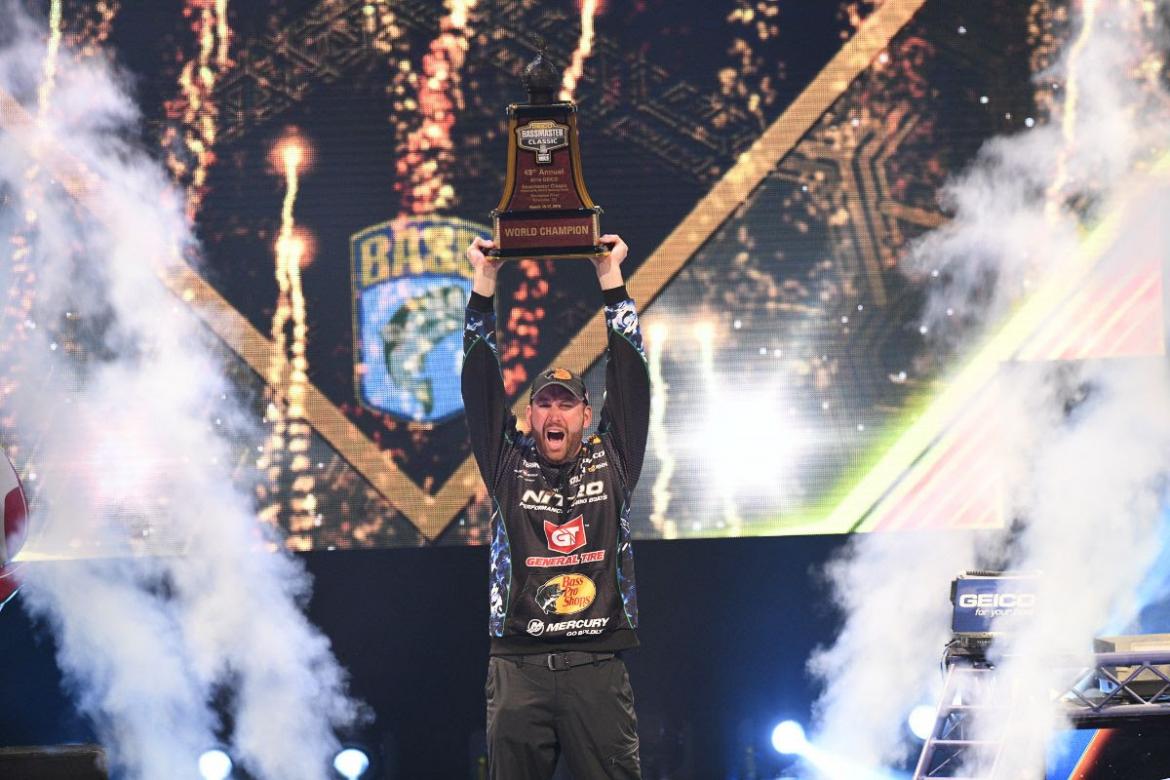 KNOXVILLE, Tenn. — For decades, it seemed almost impossible for an angler to win the GEICO Bassmaster Classic presented by DICK’S Sporting Goods in his home state.

Tennessee pro Ott DeFoe, who makes his home in Knoxville, caught five bass Sunday from the Tennessee River that weighed 18 pounds, 14 ounces to win the Super Bowl of Bass Fishing and the $300,000 prize that goes with the iconic trophy.

His three-day total weight of 49-3 helped him slip past second-place angler Jacob Wheeler before a raucous home crowd at the University of Tennessee’s Thompson-Boling Arena.

The world-championship bass tournament drew a record-total attendance of 153,809 to tournament venues, including daily weigh-ins in Thompson-Boling Arena, the Bassmaster Classic Outdoors Expo consumer show presented by DICK’S Sporting Goods in the Knoxville Convention Center and World's Fair Exhibition Hall, and morning takeoffs at Volunteer Landing. Attendance counts, including as many as 6,500 at Saturday’s early-morning takeoff, were provided by officials at each of the venues.

“This is a dream come true — a dream I’ve had since I was a 9-year-old kid,” said DeFoe, who now has six career victories with B.A.S.S. “When we came over here and did the walk-through the day before the tournament, I actually imagined hearing my name after the words ‘Bassmaster Classic champion.’

“For it to happen now … I just keep thinking I’m gonna wake up.”

For the first 36 years the event was held, no home-state angler claimed the Classic crown. But that streak was broken in 2007, and then home-state anglers won three straight times from 2014-16.

Since DeFoe lives in Knoxville — and since few others in the 52-angler field had much experience on the tournament waters of Fort Loudon and Tellico lakes — he was one of the obvious favorites coming into the event.

But things didn’t go smoothly for him in his own backyard all three days.

After catching 20 pounds during Friday’s opening round, DeFoe caught five bass that weighed just 10-5 Saturday — and he said that tough day might have been the best thing that could have happened to him.

“But the fact that it just didn’t work for me, that caused me to just scrap it all. I just went fishing today, and that’s exactly what I needed to do.”

DeFoe spent Day 1 far away from the shoreline fishing the shallow tips of points in 1 1/2 to 3 1/2 feet of water. His primary bait was a Storm Arashi Vibe lipless crankbait in the “rusty craw” pattern — but it was almost unrecognizable after he doctored it with orange, red and black Sharpies.

“I was making it a lot prettier than it is to start with,” DeFoe said, laughing. “That’s definitely a confidence thing, but I altered the color of the bait pretty substantially to give it a lot more orange and red.

“It may be a confidence thing, but who’s gonna argue with it?”

After staying offshore for most of the first round, DeFoe switched to fishing shallow boat docks the second day, when a strong north wind interfered with his pattern. His bait of choice around the docks — a 3/8-ounce bladed jig — helped him land three of his five keepers on Day 2.

He used the bladed jig again Sunday. But he moved from the shallow docks to the outside wall of a marina after a quick conversation with Keith Poche, a fellow Classic competitor from Alabama who failed to make the cut for Championship Sunday.

“In this tournament, we can all talk and share,” DeFoe said. “That kind of thing happens all the time, and sometimes it works to go try some of that stuff.

“These guys all know what they’re doing, or they wouldn’t be here.”

DeFoe’s closest competition came from Wheeler, an Indiana native who moved to Tennessee two years ago after enjoying great success on fisheries in the Volunteer State. Wheeler has two career B.A.S.S. wins — one on Lake Chickamauga and one on nearby Cherokee Lake.

“I knew it was going to be hard to beat Ott on this fishery,” said Wheeler, who caught 12-15 Sunday and finished with a three-day weight of 45-5. “All I can say is I caught fish every day, so it was a great week for me.

“If I just had to come up a little short, I’m glad to see Ott win it.”

The 49th world championship of bass fishing paid a total of $1 million to the 52 professional anglers competing.

About B.A.S.S.
B.A.S.S. is the worldwide authority on bass fishing and keeper of the culture of the sport. With more than 510,000 members internationally, B.A.S.S. is not only home to the nation’s premier fishing tournament trails, but it also boasts the most expansive and comprehensive media network in the fishing industry. Its media include The Bassmasters on the ESPN networks, more than 130 hours of tournament programming on the Pursuit Channel, 250 hours of on-the-water streaming coverage on Bassmaster LIVE and 1 million monthly visitors to the flagship website on bass fishing – Bassmaster.com. B.A.S.S. also provides more than 4.4 million readers with the best in bass fishing coverage through Bassmaster and B.A.S.S. Times, and its radio and social media programs and events reach hundreds of thousands each month.