Evers Runs Away with REDCREST on Mississippi River 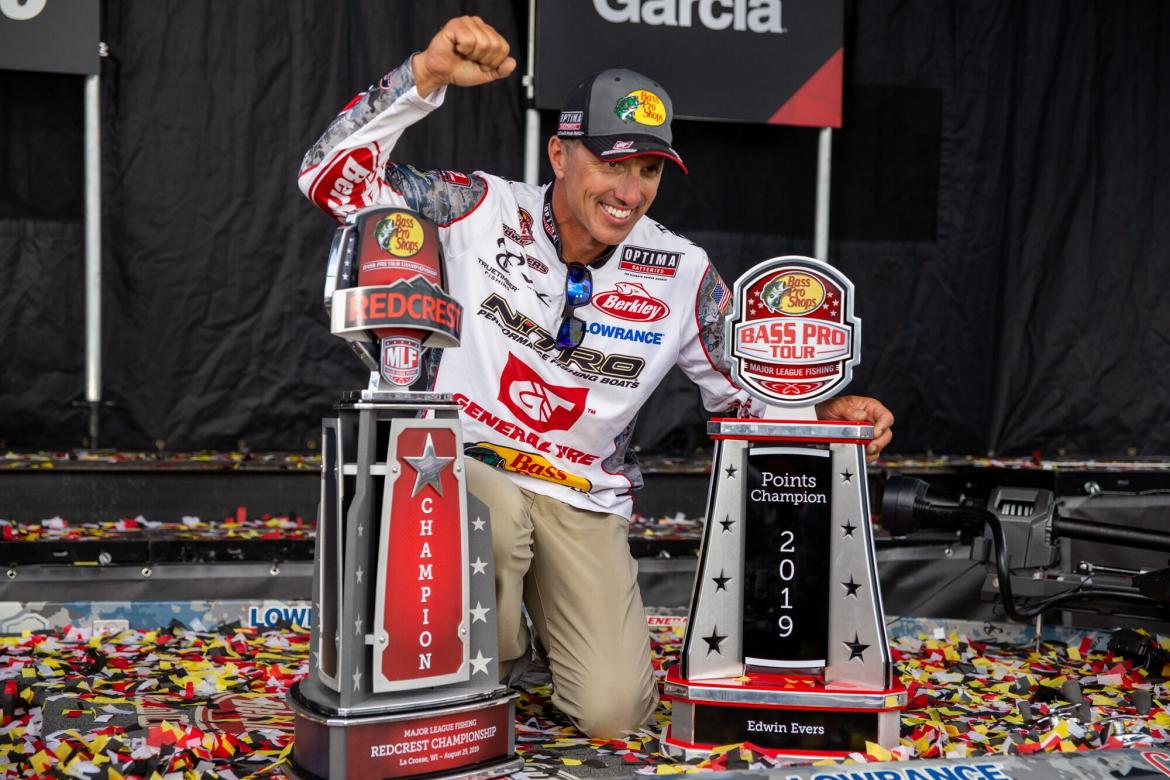 LA CROSSE, Wis. (Aug. 25, 2019) - Before the start of the REDCREST Presented by Venmo, there may have been a debate about who is currently the most feared angler on tour. But now there's no doubt. It's been a good year for Edwin Evers: Stage Two Champion, Bass Pro Tour Points Champion, and now REDCREST Champion. He took home $300,000 for his win today and can add that to the $193,600 he won during the season; no matter how you look at it, it's been an excellent year. Today, it was Evers, and then everybody else. His weight total of 85-06 was 15-pounds more than the combined totals of the second and third place anglers. Edwin Evers was the big story today, and rightfully so. Evers Dominates Evers started the Championship Round with a bang and was out in front for nearly every minute today. Greg Hackney made a push towards him during Period 2, but Evers was just getting started and turned it into a runaway victory. His Period 3 flurry of 28 fish in 45 minutes sealed the deal with an exclamation point. In the third period alone, Evers caught 34 bass for a total of 48-08. That alone would have been enough to claim the win today. He was catching them so fast that his MLF official had a growing backlog of SCORETRACKER® entries. Once all of the anglers were notified of his nearly 40-pound jump when the system caught up, it came down to a battle for second, third and fourth places. Evers did his damage in a backwater area with current flowing and bass feeding on shad. He had fished this area in previous tour-level events but was never able to secure a victory. "What an amazing day. I was so excited to catch them where I caught them," he said. "I'm so thankful I did it now because it was such a bigger stage." Evers believes that if he had won previously, it would have exposed the area to more fishing pressure, and today's win might not have happened. "The main deal was that backwater being loaded with fish," he said. He pitched a Berkley Pit Boss to shallow laydowns and a vibrating jig with a Berkley Powerbait The Deal as a trailer to current relating bass. Hackney a Distant Second Greg Hackney had a solid day of fishing with 22 bass for 40-07 and was the only angler to seriously challenge Evers today as he got within five pounds during Period 2. "I caught some fish today but never found a group of them; they were all single fish. I knew the guy who wins would be the one who finds a school of them," said Hackney. Like the rest of the field, Hackney was impressed with what Evers was able to accomplish this year. "He's in the zone, and he's made all the right decisions this year. All great fisherman get on a roll where it seems like the fish are looking for them and they can't do anything wrong," he added. Vinson Caps Off a Solid Week Greg Vinson was fourth after the Elimination Round and then led his group's Knockout Round. Today, he ended up third during the Championship Round on Pool 7. All in all, it was a great week, and he was near the top of the standings all week long. This fact isn't lost on Vinson who was satisfied with his finish. "I'm pleased with how the week went. I have some good tournament history here, but I feel I made the right decision to fish the Black River to catch enough to make it to today," he said. He had limited experience on Pool 7 before today. "I'm proud that I put enough together to finish 3rd against this group of guys," said Vinson. His daily total was 20 bass for 29-06. Daily Winners Championship Round daily awards were: * The Berkley Big Bass of the day was Greg Hackney's 3-08 largemouth. * Edwin Evers won the Berkley Catch Count award with 63 bass on the day. * Evers' 85-06 earned him the Phoenix Boats Daily Leader award. Final Results https://majorleaguefishing.com/event/redcrest-bass-pro-tour-championship... ###