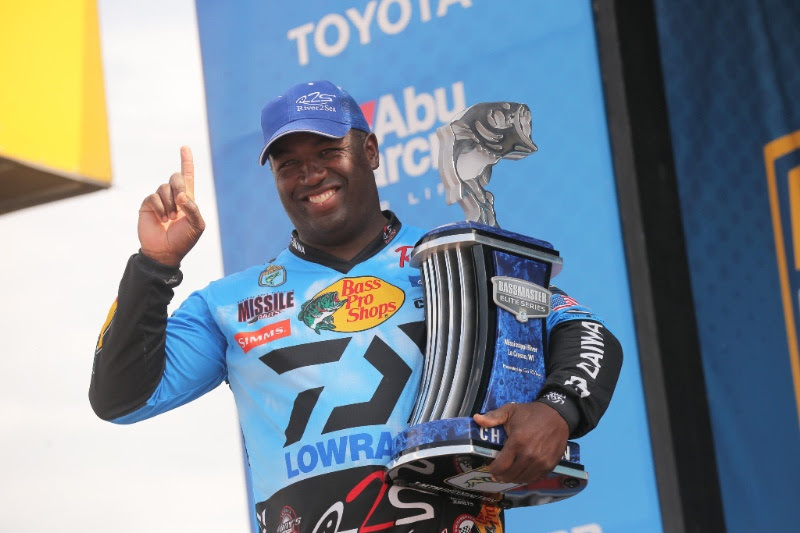 Across the four official competition days, there were four different leaders, which kept the event very exciting until the final weigh-in.

Monroe started out in 20th place on Thursday’s opening round, moved up to sixth on Friday, third following Saturday’s semi-final round of competition and then into the top spot on Championship Sunday.

The impressive victory earned the 44-year-old pro valuable Toyota Bassmaster Angler of the Year points and a $100,000 payday.

“Everybody knew that the rising river levels would affect the fish and how they positioned on the structure,” Monroe said. “I had a plan, but early on Day 1, I got stuck on a sandbar, and that was as stuck as I’ve ever been in a bass boat. I freed my boat, and it turned out to be a blessing in disguise.”

Monroe said that after he got stuck, he was hesitant to run the Mississippi River backwaters too quickly, so he decided to fish his way into the area he had originally intended to start the tournament.

“I noticed some very similar grass and duckweed not too far from where I got stuck, so I decided to start there,” he said. “I ended up catching a solid limit of bass before I ever got to my original destination. That taught me a lot about where the fish were located and how they were set up.”

As the tournament went on, and the river levels continued to rise, the fish moved further back into the shallow backwaters that were covered in grass, lily pads, duckweed and other types of aquatic vegetation.

“Today, the larger bass were as far back into the slop as they could be, but once I found them this afternoon, I caught plenty of very nice bass. It was important to understand where the bass moved as the water rose, and that was the key component to my victory this week,” he said.

“Every fish I brought to the scales this week came on my Ish Monroe Phat Mat Daddy frog by River2Sea,” he said. “It’s a heavier frog with a larger profile, which was critical to bust through the dense duckweed that covered most of the water where my fish came from.”

The combo was critical to hooking fish and pulling them from the dense cover that covers much of the Upper Mississippi River.

The last time Monroe won was in 2012 on Florida’s Lake Okeechobee, which made this win all the sweeter.

“Every time I win, it means more than the last,” he said. “The competition on the Elite Series is getting tougher and tougher, especially with all the young anglers on the scene doing so well. Winning on such a fantastic fishery means the world to me.”

Brent Chapman was awarded $1,000 for the leading the Toyota Bassmaster Angler of the Year points race at the end of the event.

The tournament was hosted by Explore La Crosse.