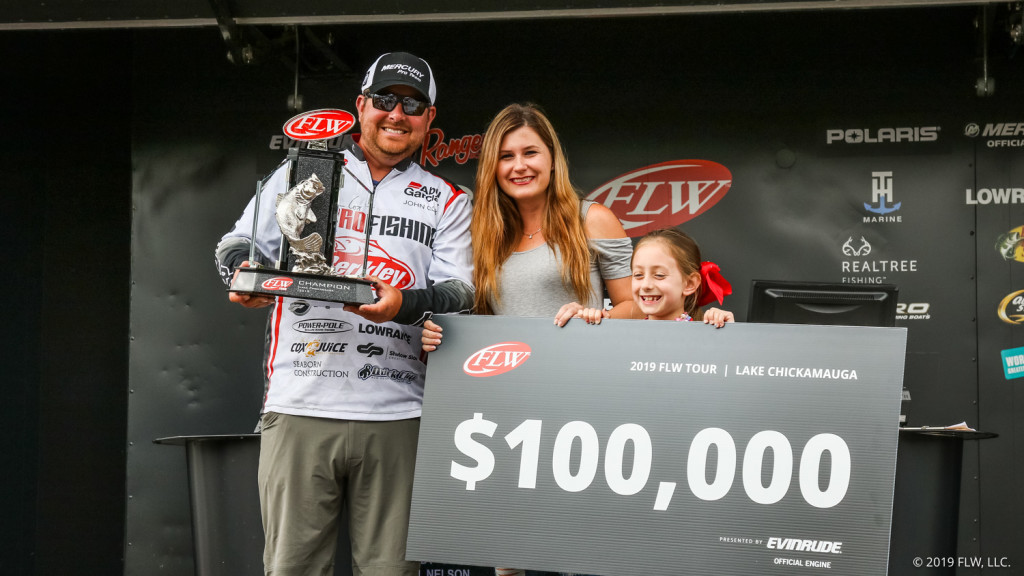 DAYTON, Tenn. (May 5, 2019) – Berkley pro John Cox of DeBary, Florida, won $100,000 at the FLW Tour at Lake Chickamauga presented by Evinrude Sunday with a four-day total of 83 pounds, 9 ounces. The victory was the fourth FLW Tour win of Cox’s career – moving him to a tie at No. 7 for the most Tour wins all-time.

Cox brought a five-bass limit to the scale weighing 21 pounds even to clinch the victory by a 1-pound, 11-ounce margin over local favorite Buddy Gross of Chickamauga, Georgia, who brought 20 bass weighing 81-14 to the scale and earned $30,100. Tour rookie Ron Nelson of Berrien Springs, Michigan, who led the tournament coming into the final day, caught a four-day total of 80-5 to finish third and win $25,000.

“I can’t believe that I won,” said Cox, who also took over the points lead in the ultra-competitive Angler of the Year (AOY) race with just one event left in the regular season. “It was so tough today. I ran all over this place and had a decent limit, but not what I needed. I was bouncing around, then right before I had to check in I remembered a stretch of trees that I hadn’t checked.

“It was the last minute, and I really don’t know why it just popped in my head, but it did – go to the trees,” Cox continued. “It was weird because I had forgotten all about this area. When I pulled up and Power-Poled down, I knew before I even threw in there.”

With less than 10 minutes before he had to check-in, Cox boated a pair of 4-pounders from the trees and raced back to the Dayton Boat Dock.

“When I caught the two in the last 10 minutes, I got all worked up,” Cox said. “I was running back, and I just felt something. Tears were coming down. It was overwhelming – I don’t know. I’ve won tournaments before, but I’ve never felt anything like it before. I’m getting chills right now just talking about it. This one was different.”

“The jig setup really came into play when the rain came in,” Cox said. “It was something that I could cover a lot of water with. I really thought the jig was going to be deal today, but I had to completely change gears at the end of the day and go back to the worm.”

With just one tournament remaining in the regular season, Cox now shifts his focus to Lake Champlain in upstate New York. He holds just a slim 1-point lead in the AOY race over Polaris pro David Dudley – a three-time AOY winner who already has an FLW Tour win on Lake Champlain on his resume.

Overall there were 50 bass weighing 172 pounds, 10 ounces caught by pros Sunday. All 10 of the final-day pros brought a five-bass limit to the scale.

Television coverage of the FLW Tour at Lake Chickamauga presented by Evinrude will premiere in 2019. The Emmy-nominated "FLW" television show airs each Saturday night at 7 p.m. EST and is broadcast to more than 63 million cable, satellite and telecommunications households in the U.S., Canada and the Caribbean on the World Fishing Network (WFN), the leading entertainment destination and digital resource for anglers throughout North America. FLW television is also distributed internationally to FLW partner countries, including Canada, China, Italy, Korea, Mexico, Portugal, Spain and South Africa.

The total purse for the FLW Tour at Lake Chickamauga presented by Evinrude was more than $860,000. The tournament was hosted by Fish Dayton and the Rhea Economic Tourism Council. The next event for FLW Tour anglers will be the FLW Tour at Lake Champlain presented by T-H Marine in Plattsburgh, New York, June 27-30. The tournament will be hosted by the City of Plattsburgh and the Adirondack Coast Visitors Bureau.

In FLW Tour competition, the full field of 165 pro anglers competed in the two-day opening round Thursday and Friday. The top 30 pros based on their two-day accumulated weight advanced to fish on Saturday. Only the top 10 pros continued competition Sunday, with the winner determined by the heaviest accumulated weight from the four days of competition.

Throughout the season, anglers are also vying for valuable points in hopes of qualifying for the 2019 FLW Cup, the world championship of professional bass fishing. The 2019 FLW Cup will be on Lake Hamilton in Hot Springs, Arkansas, Aug. 9-11 and is hosted by the Arkansas Department of Parks and Tourism and Visit Hot Springs.