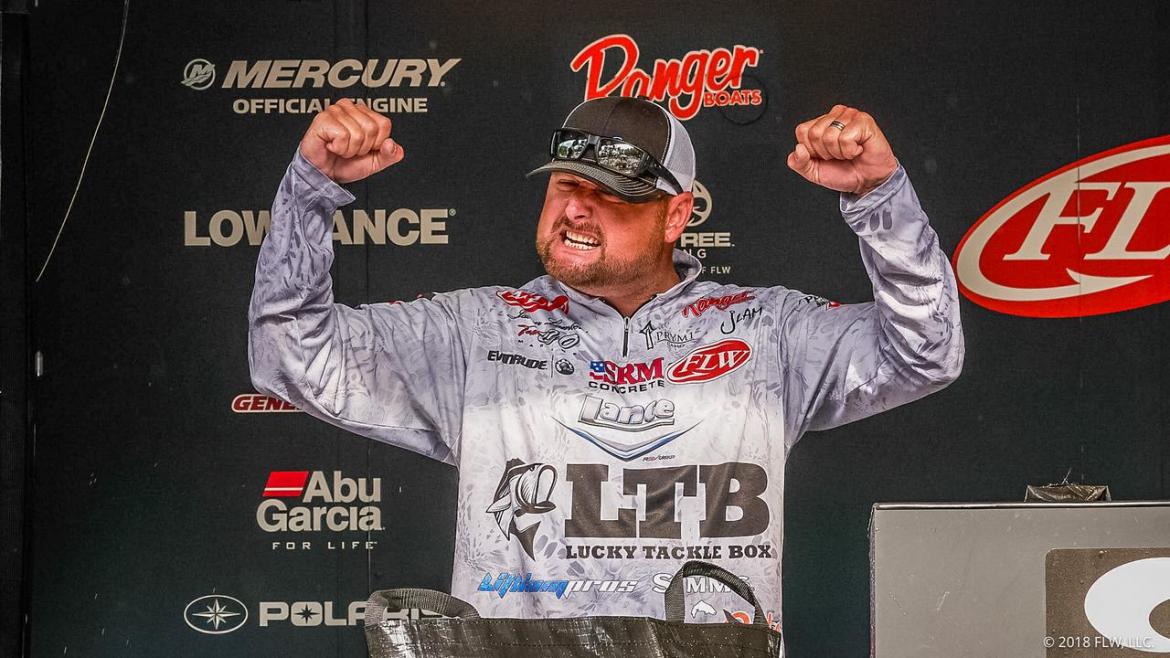 GILBERTSVILLE, Ky. (May 20, 2018) – Pro Jason Lambert of Michie, Tennessee, brought five bass weighing 27 pounds, 3 ounces, to the FLW weigh-in stage Sunday to win the FLW Tour at Kentucky Lake presented by Costa Sunglasses by a margin of 28 pounds even – a new all-time FLW Tour record for margin of victory. Overall, Lambert’s four-day total of 101 pounds, 9 ounces, was the most weight to ever win an FLW Tour event at Kentucky Lake, and the tenth-largest total-tournament catch in FLW Tour history. For his dominant performance on the water this week, Lambert earned $100,000.

“To catch over 100 pounds here – that’s history. It’s something that will last forever,” said Lambert, who claimed his third career win on Kentucky Lake in FLW competition. “This whole week has been phenomenal – this lake is special to me.”

Lambert’s first stop on championship Sunday was a point protruding from the mouth of Pisgah Bay, the location where he upgraded his limit with a 9-pounder Saturday. With a 19-pound advantage heading into today’s competition, Lambert knew that all he needed was a few keeper bites to shut the door.

“I started out this morning and got like two 3’s and a 5 on my first three casts, and immediately the pressure was off,” said Lambert. “I knew at that point in time that the game was over.”

As the morning progressed, Lambert moved to an area that produced for him both on Thursday and Saturday – a south-facing point on a main-lake ridge, just north of the U.S. Highway 68 bridge.

“I caught around five there, including a few 4-pounders that didn’t help and a giant,” said Lambert. “The fish were in about 24 feet of water and right on the break of the point.”

Lambert’s main lure for the week was a 5- and 7-inch Green Shad-colored Castaic Jerky J soft jerkbait on a 1-ounce Scrounger Head-type jig on 18-pound-test Sunline Super FC Sniper Fluorocarbon line with a 7-foot, 11-inch Duckett White Ice II swimbait rod and a Duckett 360RW reel. On Friday, Lambert also used a Gene Larew Tattletail Worm on a jighead to catch his limit south of Paris from a ditch on a shallow roadbed.

“For me, the Jerky J is a confidence bait more than anything. Everybody throws a paddle tail swimbait and it’s got that big wide wobbling tail on the back, but the Jerky J has a sleeker, more subtle approach – it really looks like a shad swimming in the water. I have the confidence in it to throw it, and I love it.”

Overall there were 48 bass weighing 180 pounds, 8 ounces, caught by all 10 pros Sunday. Eight of the final 10 pros caught a five-bass limit.

Ronny Webb of Dyersburg, Tennessee, won the Co-angler Division and $25,000 Friday with a two-day total of nine bass weighing 26 pounds, 14 ounces, followed by Stephen Crawley of Bush, Louisiana, who finished in second place with eight bass totaling 25-4, worth $7,600.

Television coverage of the FLW Tour at Kentucky Lake presented by Costa Sunglasses will premiere in high-definition (HD) on NBC Sports Network (NBCSN) June 27 from Noon-1 p.m. EST. The Emmy-nominated "FLW" television show airs on NBCSN, the Pursuit Channel and the World Fishing Network and is broadcast to more than 564 million households worldwide.

The total purse for the FLW Tour at Kentucky Lake presented by Costa Sunglasses was more than $930,000. The event was hosted by the Kentucky Lake Convention & Visitors Bureau. The next tournament for FLW Tour anglers will be the FLW Tour at Lake St. Clair presented by Mercury, June 28 to July 1, in Detroit, Michigan, hosted by the Detroit Sports Commission, Macomb County, Huron-Clinton Metroparks Authority, and the Sterling Heights Regional Chamber of Commerce.

In FLW Tour competition, pros and co-anglers are randomly paired each day, with pros supplying the boat, controlling boat movement and competing against other pros. Co-anglers fish from the back deck against other co-anglers. The full field of anglers competed in the two-day opening round. Co-angler competition concluded following Friday’s weigh-in, while the top 30 pros based on their two-day accumulated weight advanced to Saturday. Only the top 10 pros continued competition Sunday, with the winner determined by the heaviest accumulated weight from the four days of competition.