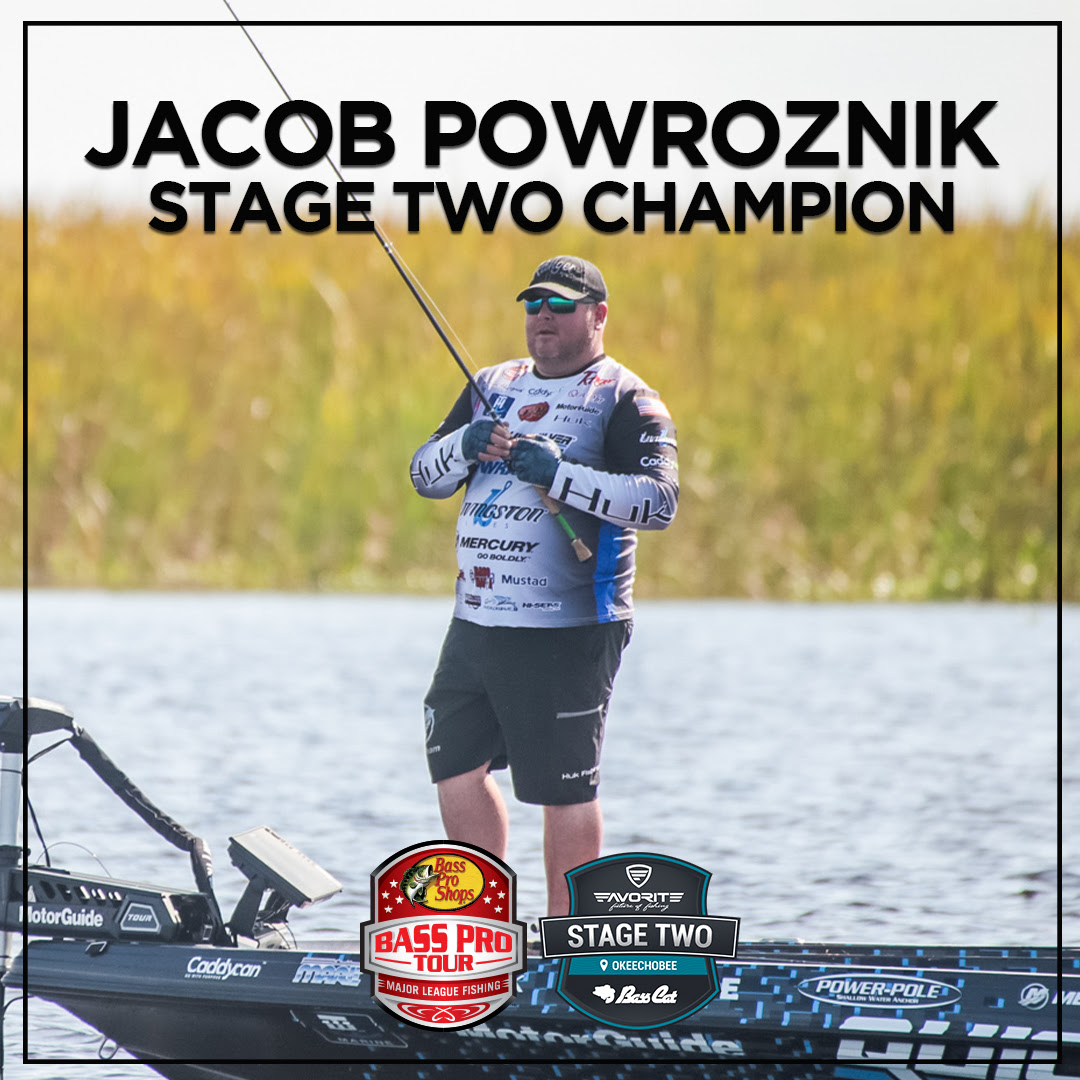 February 26, 2020 (Okeechobee, Fla.) Jacob Powroznik rose to the top of the leaderboard by catching half his day’s fish in the final Period to win. The Virginia-native tallied 49 pounds, 11 ounces to beat his closest competitor by 11 pounds, six ounces and win $100,000. With sunny skies and a third day of warming air temperature, Lake Okeechobee emerged into an exciting, action-packed playing field for the final day of the Bass Pro Tour Favorite Fishing Stage Two presented by Bass Cat. Jacob Wheeler led for a time midday after catching 10 of his 12 fish before noon but fell short of back-to-back Bass Pro Tour Titles. The Bass Pro Tour continues March 13-18 on Lake Fork near Emory Texas.

Powroznik opened his day with a four-pound, one-ounce largemouth within the first forty minutes of competition. He continued a steady catch each period with enough weight to keep him in the hunt for the Title. Ultimately, he found late-day success catching 23 pounds, nine ounces in the final period of the day to win with 15 bass for 49 pounds, 11 ounces.

“Words just can’t describe it,” said Powroznik moments after returning to shore. “You put yourself in a position and if it’s meant to be, it’s meant to be. For a period of 15 minutes in the third period I think I caught about 15 pounds and that’s momentum; momentum drives us and that’s what this sport’s all about.”

Like Powroznik, Michael Neal found a productive area and worked it for all he could. SCORETRACKER® looked as if the two were playing “strike, counter-strike” all day long. The 29-year-old Tennessean recorded his first bass, weighing in at six pounds, one ounce, at the exact same time as Powroznik. Neal had a more productive first period than Powroznik but ultimately lost the lead with only three catches in the Period 3 for a total of 38 pounds, five ounces on the day.

Midday it appeared that Jacob Wheeler might be on his way to back-to-back Bass Pro Tour Titles after catching nine of 12 fish for the day in the first period. With only one catch each in Periods 2 and 3 respectively, Wheeler fell to third place with 34 pounds, six ounces.

“I gave it all that I had,” he said as time ran. “I was focusing on really shallow pockets where the fish were pulling up to spawn. The water had to be shallow enough that it wouldn’t even register a depth on my electronics, the shallower, the better.”

Jeff Sprague caught the Berkley Big Bass of the day at six pounds, 12 ounces. Jacob Powroznik had the most fish on SCORETRACKER® with 15, as well as earning the Phoenix First award with a total weight of 49-11.

Fans around the world can catch all the action every day of competition on MLFNOW! livestream on MajorLeagueFishing.com or download the MLF App for your Apple or GooglePlay device or on MyOutdoorTV (MOTV).

About the Bass Pro Tour:

The Bass Pro Tour began in 2019 and features 80 of the best professional anglers in the world, including Kevin VanDam, Edwin Evers, Aaron Martens, Mike Iaconelli, Jordan Lee, and Skeet Reese. Each stage includes six days of competition using the Major League Fishing, catch-weigh-and-immediately-release format, where every bass over a variable minimum weight, which is two pounds on Lake Eufaula for Stage One, toward a cumulative weight total for the day.  Variable minimum weights are determined by fishery akin to a golf course handicap. The field of 80 anglers is divided into two groups of 40 to compete on days one and two respectively for the Shotgun Round. On days three and four, the Elimination Round culls the field based on a combined 2-day total weight from each angler’s Shotgun and Elimination Round. The top 20 anglers from each group in the Elimination Round (40 total) advance to the Knockout Round on day five, which determines who will compete on that final day, the Championship Round, for the Stage title and $100,000.

In addition to the economic impact on a host community, Major League Fishing showcases the region through their award-winning, live and linear programming. Each Stage of the Bass Pro Tour is broadcast live on the Major League Fishing app, MyOutdoorTV (MOTV), and majorleaguefishing.com, totaling more than 325 hours of original programming. Fans can follow the fast-paced nature of the MLF format as it unfolds on the live leaderboard through “SCORETRACKER® updates.” Highlights from each Stage of the 2020 Bass Pro Tour will air on Discovery Network beginning in July 2020 and Sportsman Channel in early 2021.