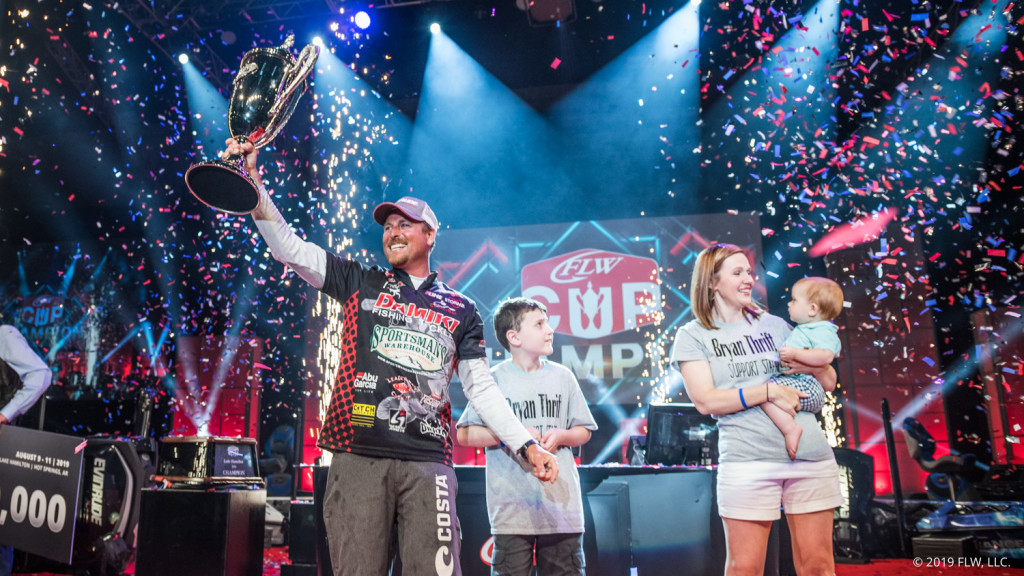 HOT SPRINGS, Ark. (Aug. 11, 2019) – Pro Bryan Thrift of Shelby, North Carolina, brought a five-bass limit to the stage weighing 10 pounds, 13 ounces, Sunday to claim the title of FLW Cup Champion at the FLW Cup on Lake Hamilton. Thrift, with a three-day total of 15 bass for 38 pounds, 7 ounces, won by a 5-pound, 1-ounce margin over pro Kyle Walters of Grant Valkaria, Florida, who caught a three-day total of 15 bass weighing 33-6, good for $60,000. Sunday's final weigh-in marked the finale of the 2019 FLW Cup, which featured 52 of the best professional bass anglers from across North America. Thrift led the tournament on all three days of competition and took home the top prize of $300,000.

“I feel like this tournament was an event that everybody thought I would eventually win one day, except for myself,” said Thrift, who pushed his career earnings to more than $3 million dollars and is now the No. 2 all-time leading money winner in FLW history. “I felt like I would eventually get a chance, and I felt like this tournament was the first Cup that I truly had a chance to win. I still can’t believe that I won it, this is an amazing feeling.”

Thrift said that his tournament was a “mixed bag” each day. Of the 15 bass that he weighed in, he caught them on eight different baits, including a buzzbait, a topwater walking bait, a Texas rig, a drop-shot rig, five different crankbaits, a frog, a Damiki Underspin and a Damiki Armor Shad Paddle Tail swimbait.

“Fishing in August, you have to fish everything,” Thrift said. “Every morning I’d start fishing shallow – the bank and shade lines – then I’d fish a few boat docks, and then I’d move out and fish some brush. I even caught some fish that weren’t around anything, just around bait and suspended. I caught them on seven or eight different patterns, and you have to have that in August because two or three of them will let you down.”

The only time that Thrift really stuck a lot of fish in a hurry was Sunday when he pulled up to his first spot and fish were busting the surface over a 200-yard span.

“Today started out actually pretty good,” he said. “I ran to a place that I knew [Bryan] Schmitt was catching them schooling, and I knew he didn’t make the cut. So I went in there, and sure enough they were schooling like crazy. I caught a limit fairly quickly at probably about 8 or 8:30. It didn’t weigh much; maybe 7 or 7 1/2 pounds. And I’m thinking, ‘Shoot, I’ve got all day to upgrade. This is good. We’re good to go.’

“So that helped slow me down and give me confidence. But at about 12:30 I hadn’t had another bite. I had one area that I’d caught most of my weight in in the last hour and a half each day in Hot Springs Creek. So I ran in there at 12:30. I said, ‘If I’m gonna win it, I’m gonna win it back here.’ I didn’t crank the boat until 3:30 and ended up culling three.”

The spot was a small dead-end pocket with deep water running all the way to the back. The bass were pushing bait up not quite to the bank, but close.

“It’s just a shallow flat,” he said of that final spot. “It’s got a lot of shad back there. There were three little brush piles. They weren’t big. They were maybe the size of the hood of a truck; just three small, little brush piles. I’d just rotate between them. One of them, they were kind of schooling around a little bit, and I caught a couple around it while they were up schooling.”

Full results for the entire field can be found at FLWFishing.com.

Overall there were 43 bass weighing 66 pounds, 3 ounces caught by pros Sunday. Eight of the final 10 anglers weighed in five-bass limits.

The 2019 FLW Cup at Lake Hamilton in Hot Springs, Arkansas, was hosted by the Arkansas Department of Parks and Tourism and Visit Hot Springs. Total attendance for the three-day event was 67,453 fishing fans. The Bank OZK Arena was at 100-percent capacity, Sunday, with additional fans watching the Trace Adkins concert and final weigh-ins on the big screens at the Hot Springs Convention Center.

Television coverage of the 2019 FLW Cup at Lake Hamilton will premiere in the fall of 2019. The Emmy-nominated "FLW" television show airs each Saturday night at 7 p.m. EST and is broadcast to more than 63 million cable, satellite and telecommunications households in the U.S., Canada and the Caribbean on the World Fishing Network (WFN), the leading entertainment destination and digital resource for anglers throughout North America. FLW television is also distributed internationally to FLW partner countries, including Canada, China, Italy, Korea, Mexico, Portugal, Spain and South Africa.