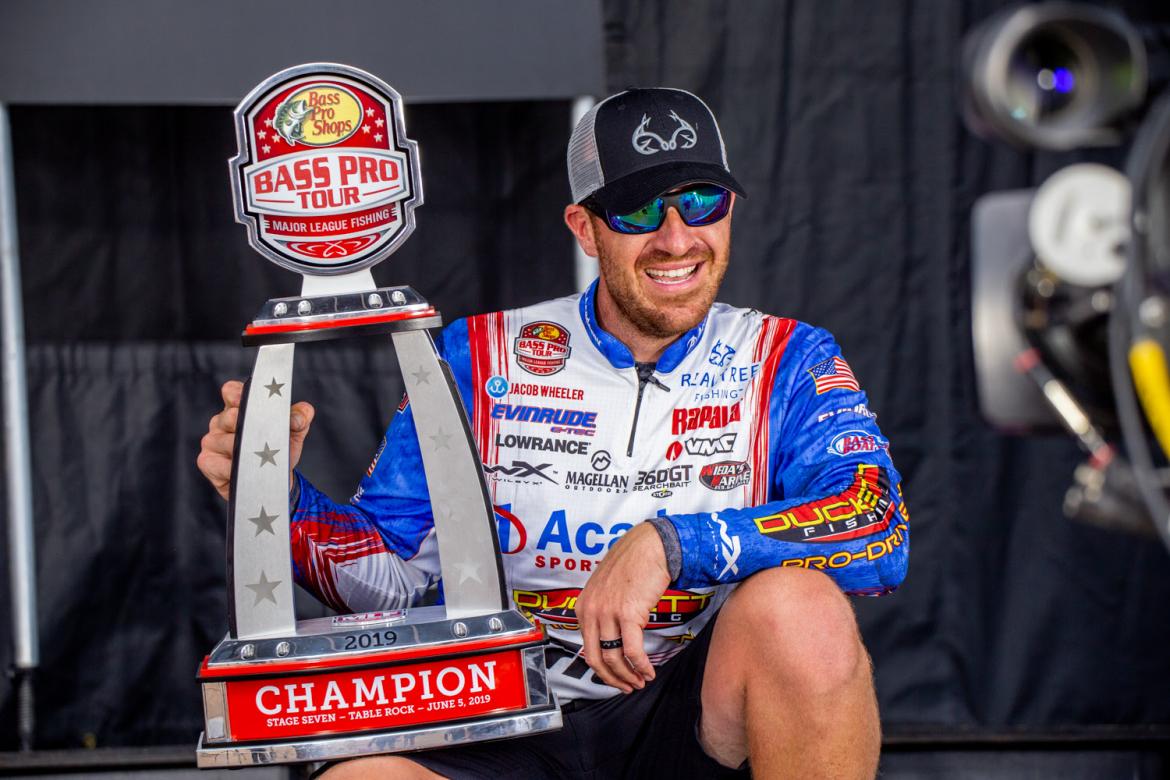 BRANSON, Mo. (June 5, 2019) - Jacob Wheeler has been in contention at several events this year, but one thing had eluded him: a Major League Fishing® (MLF) Bass Pro Tour win.

Wheeler owned the Bass Pro Tour Bad Boy Mowers Stage Seven Presented by Covercraft. He was the story after the Shotgun Round with his record-setting pace, then after leading the Elimination Round, and again when he survived a midday boat swap to still finish eighth in Tuesday's Knockout Round.

He remained in contention every day, and was able to run away with the win Wednesday after capturing 56 Table Rock bass for a total of 84 pounds, easily outdistancing Brandon Palaniuk's 69-2.

Another Big Day for Wheeler

When time expired, Wheeler was visibly emotional after the realization that he won had set in. He finished second to Jacob Powroznik at Stage Three, and stated on MLF NOW! that he told himself if he was ever in the same situation, he would not let up. And he didn't.

"The fishing was crazy good the first day (88 fish for 129-14), but I knew the pressure would get to them, so I had to change it up," Wheeler said after his win.

Having to change boats during the Knockout Round was understandably stressful, but he overcame it.

"Today, it was great to be back in my boat and familiar with everything," he recalled.
Several baits accounted for Wheeler's fish this week. He fished a 3- and 4-inch white Storm Largo Shad swimbait, a Googan Baits Slim Shake Worm in Blue Baby on a shaky head, a morning dawn hand-poured worm on a drop-shot, and a Neko-rigged Googan Baits Lunker Log.

The top four anglers remained the same from late in Period 1 until time ran out. They swapped places several times, but it was mainly a chase for Wheeler throughout the day.

"Today when I caught a fish, the whole school would follow, and it took too long for them to get back and reset," said the Idaho pro.

Meyer briefly held the lead today and then started to fall back in the standings before finally settling in 3rd with 67-06. "I just ran out of fish. My schools disappeared and the places I had left only had one or two fish on them," he said.

Meyer did the majority of his damage this week with a Strike King Sexy Dawg topwater and 3.25" Strike King Rage Swimmer swimbait.

Connell had a similar situation and ran out of fish.

"I didn't have enough schools of fish and could only fish what I had been catching them on," he said.

A Googan Baits Drag n Drop on a drop-shot, and a prototype Googan Baits swimbait were his one-two punch this week.

Late in the day, the standings from the previous day were nearly reversed as the top 3 from yesterday: VanDam, DeFoe, and Wiggins held onto 8th, 9th, and 10th.

DeFoe found himself in 9th but slowly made his way to 6th place and the additional money that came with it. He landed 30 bass for 54-5 on the day.

Along with Wheeler, VanDam was a significant player in Stage Seven after leading his group into the Elimination Round, and then as the second-highest finisher yesterday. He finished with 14 bass for 23-2, easily his lowest total of the week.

When asked what changed, VanDam said it simply came down to the conditions.

"Having no wind and no clouds hurt my bite," he said.

The fishing was different this week with more fish relating to offshore cover, but it still kicked out plenty of bass. More records were set as Wheeler totaled 213 bass for 315-9 en route to his victory.

Knockout Round daily awards were:
The Berkley Big Bass of the day was Ott DeFoe's 4-6 largemouth
Wheeler won the Berkley Catch Count  award with 56 bass on the day
Wheeler's 84-0 also won him the Phoenix Boats Daily Leader award