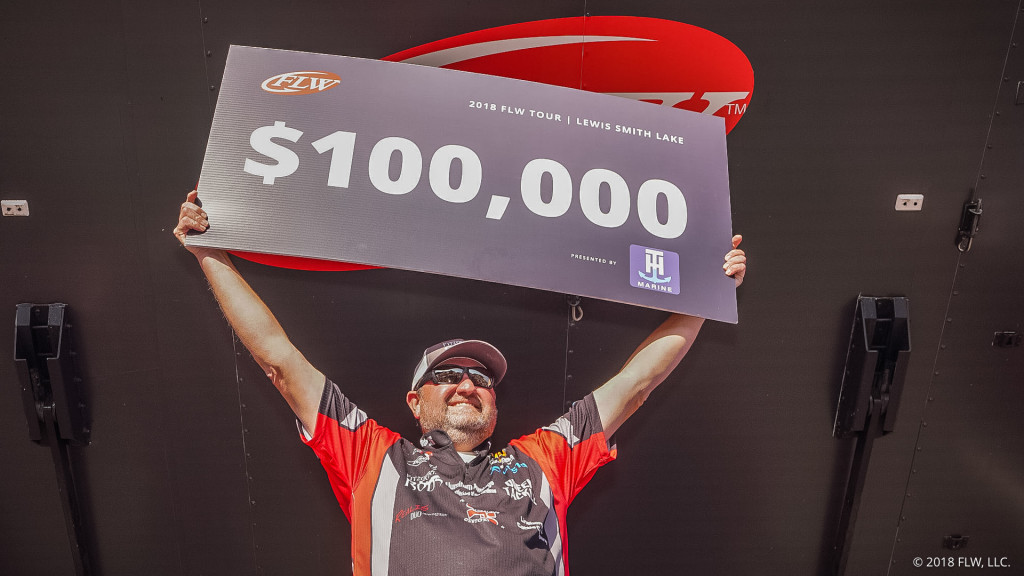 JASPER, Ala. (April 29, 2018) – Pro David Williams of Maiden, North Carolina, brought a 13-pound, 13-ounce, limit of bass to the weigh-in stage Sunday to win the FLW Tour at Lewis Smith Lake presented by T-H Marine with a four-day cumulative total of 20 bass weighing 64 pounds, 9 ounces. For his dominant showing on the water this week, Williams earned $102,700 and moved up to the No. 4 position in the Pennzoil Marine Angler of the Year race.

“It’s an incredibly tough field of anglers and each one dreams of winning one of these tournaments. To win one in my first year on Tour is pretty special,” said Williams, who earned his first career Tour-level win and is now extremely likely to qualify for the Forrest Wood Cup. “It’s been a long time coming and its extra special when you really have to work for it.”

During the tournament Williams targeted the morning shad spawn, skipping a jig around and under docks up the White Oak, Crooked and Rock creek arms. He was able to rack up the majority of his weight fairly quickly each morning, catching both largemouth and spotted bass.

“I had no idea I’d lead from start to finish – I didn’t really have that great of a practice,” said Williams. “I had one good area and didn’t really realize how many fish were in there. But, I was able to milk it for four days. It was pretty incredible.”

Williams said his main baits this week were a white Queen Tackle Tungsten Swim Jig and a TrueSouth Custom Lures Fathead Jig with a Bizz Baits Cutter Craw and Zoom Ultra Vibe Speed Craw as trailers. He also worked a TrueSouth Shimmy Jig with a Zoom Z Craw and a TrueSouth V-Twin buzzbait near flooded cover, in between docks, to lure a few key bites as well.

“Lewis Smith Lake fishes a lot like our lakes back home in North Carolina and that’s the reason I think that I did well,” said Williams.

Overall there were 50 bass weighing 128 pounds, 1 ounce, caught by the final 10 pros Sunday. All 10 pros weighed a five-bass limit.

Joel Willert of Prior Lake, Minnesota, won the Co-angler Division and $20,100 Friday with a two-day total of 10 bass weighing 24 pounds, 4 ounces. After winning the Co-angler title at Lake Cumberland earlier this month, Willert became the fifth co-angler in FLW Tour history to win back-to-back events.

Television coverage of the FLW Tour at Lewis Smith Lake presented by T-H Marine will premiere in high-definition (HD) on NBC Sports Network (NBCSN) June 6 from Noon-1 p.m. EST. The Emmy-nominated "FLW" television show airs on NBCSN, the Pursuit Channel and the World Fishing Network and is broadcast to more than 564 million households worldwide.

In FLW Tour competition, pros and co-anglers are randomly paired each day, with pros supplying the boat, controlling boat movement and competing against other pros. Co-anglers fish from the back deck against other co-anglers. The full field of anglers competed in the two-day opening round. Co-angler competition concluded following Friday’s weigh-in, while the top 30 pros based on their two-day accumulated weight advanced to Saturday. Only the top 10 pros continued competition Sunday, with the winner determined by the heaviest accumulated weight from the four days of competition.